“You have a Treasure in your midst…the great Dave Feder ”

“Dave has a magic way of making you feel like an old friend with songs that are original and intimate.  He is a master guitarist who plays his own intricate Flamenco influenced finger-style music with laid back island feel.”

“Dave is like a train that rides with solar energy”

When addressing musicianship and guitar artistry, I am always thrilled to listen to whatever he comes up with….it is always spot on, incarnated, musical and spirited, with a groovy and candid sense of urgency, joy and light. Last but not least, it is generous, like the man himself.”

“Black Emerald is David Feder’s best work yet. I’ve listened to it over and over, and each time I’m knocked out by the energy of the music. It’s one of those special albums that stands as a singular creative vision, not just a collection of songs. Dave’s touch with the Latin guitar is magic.”

“And the music is so clear and true that it makes you shiver.”

“David Feder… a real world-class act. He did amazing things on an electrified Taylor classical guitar during an incredible set… If his sheer musicianship wasn’t dazzling enough, the stories he told about his compositions were funny, moving, and he really touched a lot of people with his music.”

If you can shred on a nylon string guitar, that’s what David Feder does. If you like terms like Boho Chic and Eclectic Bohemian, then you’ll have some insight into the style he’s coined as Bohemian Flamenco. Having traveled the world and then settling in the Florida Keys, Feder’s all original set list pulls from the many musical environs he’s inhabited. He plays in finger style with a mix of a little bluegrass and a strong Flamenco technique, but some of his hard driving runs are so strong and clear, you’d swear he’s using a pick. From my vantage point at the back of the room, all the chair dancing in the audience was evidence of the love everyone in the room was sharing for the music and soul Feder projected. The ninety-minute set flew by, and everyone left with lifted sprits and smiling faces!

“Dave has a magic way of making you feel like an old friend with songs that are original and intimate.  He is a master guitarist who plays his own intricate Flamenco influences finger-style music with laid back island feel.” – NPR

Internationally acclaimed Guitarist-Composer David Feder has carved out a niche of his own, playing a signature blend of Flamenco-infused Folk music. His laid back style easily disguises the complexity of his blazingly deft finger picking. Three decades of island living in the Florida Keys has influenced Feder’s breezy, approachable, and sophisticated music.  His musicianship incorporates miles of style, (savvy yet innocent, intelligent yet accessible) woven into a personal journey telling stories about life through the strings of his guitar.   Feder has been praised by NPR’s All Songs Considered, World Café Live, PBS Art Loft, NPR’s Folk & Acoustic Music, the Miami Herald, and Time Out magazine among others.  Feder spent six weeks at the top of the Broadjam World Music Chart with his critically acclaimed album “Black Emerald” and has been featured on All My Children (ABC), Art Loft (PBS), the NBC Good Morning show, National Park Service Educational Videos, and Florida Everglades Documentaries.

One Sheet and Posters 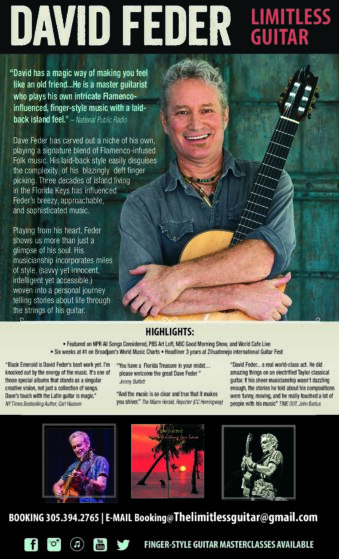 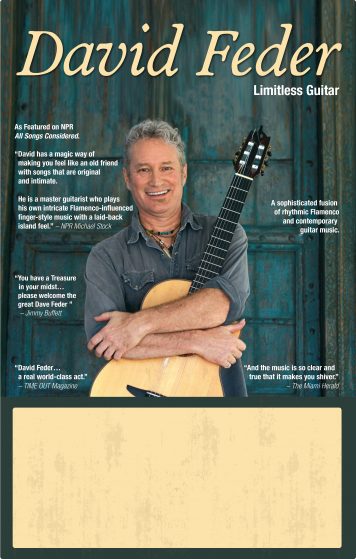 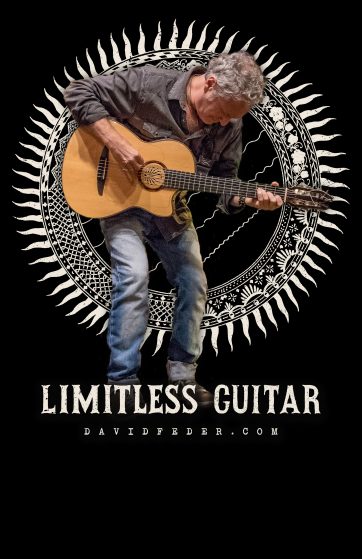 "Searching For Beauty In Music"