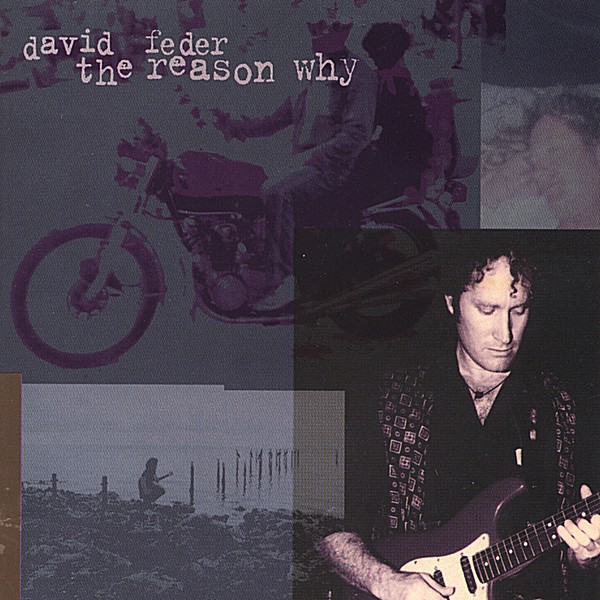 The Reason Why
Pay what you want!
Year:19987
UPC:645057111226
Go to the store page
Tweet
Audio is played partially for security reasons
“If you don’t want to hit the dance floor, something’s wrong!”

Someone once said that writing about music is comparable to dancing about architecture. There’s no way to convey through the written word just how good the performances on “The Reason Why” are; I can only suggest that you get the CD and find out for your self. If you like cool jazz, hot blues, rock, swing, Michael Franks, or Steely Dan, you won’t be disappointed in the CD.

When you get the disc, turn off the phone and TV, turn the lights down low, pour yourself a glass of fine wine or other suitable spirits, perhaps light up a cigar, sit back, pop in the CD, and get ready for some great music.

Singer/songwriter/guitarist David Feder has released his latest CD,titled ‘The Reason Why.” Featuring eleven original songs, “The Reason Why” provides even more proof that Feder continues to be one of the most talented musicians in the Florida Keys. (He’s a hell of a nice guy to boot)

Unlike his previous release, “Waiting For Sara,” the new disc is a collection of jazz-, blues-, and rock-influenced vocal songs. Not that there’s anything lacking in the instrumental side, however, Feder is in his usual excellent form on guitar and vocals, plus guest guitarists Jimmy Hawkins and Roach Thompson lay down some tasty licks. Saxophonist/flautist Marc Berner burns up quite a few tracks as well. Suffice it to say that there are a lot of great performances by some excellent musicians on this CD.”David Feder took the stage next — a real world-class act. He did amazing things on an electrified Taylor classical guitar during an absolutely incredible set. Dave premiered several new compositions from two soon-to-be-released CDs called “Black Emerald” (Hillbilly Flamenco) and “Leila’s Dream,” as well as songs from “Waiting for Sara.” If his sheer musicianship wasn’t dazzling enough, the stories he told about his compositions were funny, moving, and he really touched a lot of people with his music.”

Magic happens when a person finds the one thing in life he or she was meant to do. Such is the case with Upper Keys musician David Feder. Somehow it’s hard to imagine Feder doing anything other than creating and playing music.

Feder began taking piano and guitar lessons when he was four years old and was writing songs for the guitar at age ten! In fact, he says that some of the music he plays today are variations of songs he wrote as a child. “I believe we all have one song inside of us,” commented Feder, “and everything we write ends up being a version or another expression of that one song.”

However, he took a somewhat circuitous route before finally succumbing to his lifelong love of music.

Originally from Niagara Falls, New York, Feder studied engineering at Rochester Institute of Technology. And even though he often performed at coffeehouses while at school, without music as an integral part of his life, Feder says he was “pretty miserable.” So after graduation, he enrolled in the music education program at the State University of Buffalo. Interestingly, Feder says school was difficult, musically/spiritually. “It’s hard to play and improvise when you’re being taught to try and quantify everything,” he said. “To me it felt like It was sucking the art out of the music.”

Luckily there were Some very cool musicians in Buffalo at that time who provided the fuel for Feder’s Fire.

So he left school and began performing with bands playing saxophone and guitar, doing studio session work, and supplementing his income with a variety of jobs. But Feder became disenchanted with the music scene because of the destructive life styles so often associated with musicians. He decided to put performing aside and concentrate on electronic design.

However, the road ahead still had a few twists and turns in store for Feder. As a favor, he agreed to help out a friend by playing the guitar in his jazz band. According to Feder, once he started performing again, he knew this was what he wanted to do. Says Feder, “Even a bad night playing music is better than working!”

While he doesn’t think of playing music as being “work”, he does think of it as a business and feels strongly that musicians should get paid fairly for their talent. However, he admits that it’s sometimes difficult for musicians, or any artist, to put a price on their work because it’s so personal and enjoyable.

Another thing Feder feels strongly about is helping others. When I met him, he had just rescued an injured bird and was trying to make it comfortable until he could get help. He performs 12 – 13 benefit concerts a year in the Upper Keys, and just recently appeared at two different benefits on the same day! On all of his CD’s you’ll find the line, “Please adopt a homeless animal.” Words he lives by, since all of his dogs have been adopted from shelters. Dave is one of the principal organizers of “BayJam”, which raises money for art and musics cholarships, and “Moradapalooza.” Feder says, “If using my name helps to raise some money for a good cause, I’m all for it!”

While he’s basically known as a jazz and blues musician, Feder embraces all types of music. His band, the Saltwater Blues Band,(aka Salagua Azul) includes musicians from Argentina, Colombia, Spain and Puerto Rico and Feder enjoys the interpretations these musicians bring to the pieces they play. He’s currently interested in Cajun and bluegrass sounds, and has gone back to their roots by studying and experimenting with Celtic music.

Feder feels Americans place too much emphasis on categorizing music and likes playing in Europe where attitudes toward musical styles are more liberal. Fluent in French, he often plays in the south of France and his music has been used in French movies, environmental videos and radio commercials. He likes playing at corporate events, weddings and private parties.

The range of styles in his CD’s exemplifies his diverse interests. His first album, “Waiting for Sara,” combines soft jazz with a slight Latin influence, while his second CD, “The Reason Why,” is pure funk and blues. His soon-to-be-released album, “Leila’s Dream,” contains all original songs inspired by children under the age of ten. And he’s currently working on an album for children featuring original music, and possibly some traditional children’s songs, played in different styles.

Feder is a devoted husband and father – wife Suzi and son Nyan take center stage in his life. In fact, four-year-old Nyan is already playing the guitar and even accompanied Dad on two songs in his album, “The Reason Why.”

With his son standing next to him on stage, David Feder has come full circle in a life inexorably intertwined with music.