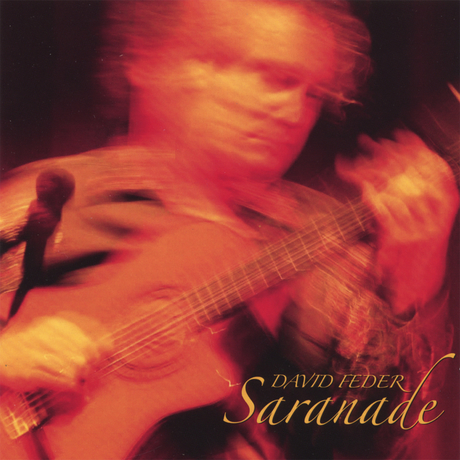 “Saranade”, is overflowing with the beautiful instrumental solo guitar work that audiences worldwide, have come to love in David’s live performances.

“… one of the most exquisite and breathtaking guitarists of our time…”

Guitarist/Songwriter David Feder has been captivating audiences with his provocative and playfully sensual, music for over 20 years. With a warm smile and a funny charismatic presence, this remarkable musician has earned a devoted following worldwide. And with his fresh approach to fingerstyle guitar, “Feder breathes new life into the American Gypsy-World Music scene.” Feder feels his life work is to foster social and spiritual healing through music, humor, and other peaceful avenues.

“The Honeymoon Capital of the World.” At age five, the family moved to rural Pennsylvania where David began learning piano and guitar. By age nine, influenced by his grandfather’s humorous folk singing and the guitar playing of the local sheriff, he started writing and playing his own songs. In fact, most of the tunes he plays today are variations of those songs he wrote as a child. “I believe we all have one song inside of us and everything we write ends up being one version or another expression of that inner song.”

“David Feder took the stage next — a real world-class act. He did amazing things on an electrified Taylor classical guitar during an incredible set…. If his sheer musicianship wasn’t dazzling enough, the stories he told about his compositions were funny, moving, and he really touched a lot of people with his music.”

David is an avid martial artist, practicing for over thirty-five years. He says the discipline that comes from that practice helps focus mind and body to better express the music inside. Something about releasing the the need to win allows the music to develop and flow freely. And by viewing everyone as teachers, it becomes easier to open up emotionally and share artistically and spiritually. It’s really about learning how to listen with the whole self.

David studied photographic engineering at RIT in Rochester, NY and Music performance at Buffalo State Teachers collage. Along with music, David has made his living as an electronic designer, studio engineer, and underwater camera repairman. For the last twenty years Feder has lived in the island paradise of the Florida Keys, a Mecca for artists of all mediums. The diversity of culture in the islands is embraced in all of Feder’s recordings.

In 1995, Feder signed a distribution deal with Lyra Recordings, boosting performances in the USA and Europe. His music is now heard on radio and films worldwide. Whether performing at large outdoor festivals or small intimate settings, David is equally at home solo or with his all star band.

David’s first album, “Waiting for Sara,” is soft romantic Latin Jazz while “The Reason Why,” is pure funk and blues. The “Black Emerald” CD is Exciting “Hillbilly Flamenco,” with players from Weather Report, The Bee Gees, The Miami Sound Machine, Kid Creole and the Coconuts, and other great players. David has also created, under the direction of his Wife Suzi-Sara, a Spa/relaxation CD titled “This Time In Between.” And this CD, “Saranade”, is overflowing with the beautiful instrumental solo guitar work that audiences worldwide, have come to love in his live performances.

Feder is a devoted husband and father. His wife Suzi and son Nyan take center stage in his life. Feder’s 11 year old son Nyan is an up and coming musician in his own right. With his son standing next to him, David Feder has come full circle in a life inexorably intertwined with music.

Nyan Feder has been playing guitar since the age of two. As the son of a performing musician, concert promoter and studio owner, he is no stranger to the music world. Growing up on and around performance venues, Nyan is at home on any stage. Fortunately, many great local and international musicians he has met over his few years in the industry, generously continue to share their knowledge with the thirsty and talented student.

Nyan’s main instrument is the guitar, but he also plays piano, sax and experiments with several other musical instruments.

Nyan started out playing Spanish Fingerstyle Guitar with dad, but recently he’s dove into the deep end of the blues styles of Stevie Ray Vaughn, Robin Trower, Albert Collins, and Eric Clapton. Nyan started writing his own songs during hurricane Katrina and continues to write whenever the muse strikes him.

In the past few years Nyan has played concerts large and small, from the Florida Keys to Ixtapa, Mexico. He has already shared the stage with rock and roll legends including, Steven Tyler, DMC, Chuck Berry, Alto Sax (from Bob Seger’s Silver Bullet Band), George Terry (Eric Clapton’s Guitarist and writer of Lay Down Sally), and Skunk Baxter from Steely Dan and the Doobie Brothers.

Currently Nyan plays shows internationally with his father David and also with the Saltwater Blues Band.

Nyan has several music festivals under his belt, and continues to surprise and delight audiences wherever he performs. In addition to schooling, Nyan spends his non music time as a skateboard enthusiast and an all star little League baseball player.

You can expect much more music from this young talent in the years to come.

For more information check the Schedule at the website:

Sometimes after a show, Sara is already asleep. Saranade is the song that just came to me over a couple of late nights sitting on the edge of the bed playing for Sara. It was always a kind of lullaby, just to let her know I was home.

A two-foot guitar for “Quinn”

We gave a little half-size gut string guitar to the son of our friends Carl and Fenia. Quinn was very young and full of energy. He could strum a guitar for a long time. So to make it easier on everyone concerned, I tuned the instrument to an open C chord. That way everything would sound much more pleasant. When I played the guitar to see if it needed any tweaks, a little riff happened. It sounded pretty cool. That riff became the main theme to this song, still played in open C.

Suite in A (sometimes Sweet in A)

When we bought our home in the Florida Keys, lots of work needed to be done. Sara left for Toronto to help her friend while I stayed home to build some furniture and paint. I listened to music by Badi Assad the whole time. After some varnish mishaps and a collapsed roof were repaired, the house finally got somewhat back together and this song was in my hands. I think Badi was a big influence, not to mention smelling paint and varnish fumes for a month.

Violet’s Sky…is a song dedicated to all the children who for one reason or another didn’t make it into the world this time.

“The Princess” is a Celtic flavored march I wrote while visualizing a Monty Pythonion wedding scene. In my head, I heard it as a violin piece but alas, I don’t play the fiddle very well. The music came out way less comic than intended. Now it has become one of my most requested songs for brides walking down the isle. Go figure.

The Bun was written for Nyan when he was in the womb. He was a bun in the oven. So we nicknamed him The Bun. When he emerged he never lost that nickname. The song has gone through many transformations since it was first recorded on Black Emerald.

That is why this solo fingerstyle version is called the “Bun Evolution” Nyan now performs this son with me live at some of our shows.

Right with the World started out as a little poem about living and became kind of my theme song. In the hopes that without being too politically abrasive in public, I can make a little difference in the spiritual and physical health of the human race. Right with the World is how I strive to live, and how I hope to raise awareness in our one big family.

“Right with the World”

Right with the world….

There’s no partially hydrogenated oil in my food

I’m livin in the spirit and I definitely will

I’m gonna be right with the world…

You Hate them they hate you

That’s the one thing we ain’t never gonna do

We’re gonna be right with the world…

We don’t teach our children the politics of greed

They don’t get their education from watching the TV

We’re raising then on honesty and praying that they Live….

Right….. with the world…

Leila’s Dream… One fine morning, while we were still in bed, our very good friend Lori, called us with a retelling of her daughter Leila’s (Nyan’s then girlfriend…they were five) dream from the previous night. It was a vivid tale of dancing fairies and circus scenes. The retelling was so inspiring to me that in my inner world it became this song. Voila!

The dreamy Madeline Maeve was written over a period of a few weeks we spent in the Azores with our friends Tom, & Bernie. Those islands and the spirit of their people were a huge inspiration for my music. The song is named after the their very young daughter Madeline, who was and continues to be a delight.

Street Light Skate (Nyan loves Skateboarding) was written as an acoustic jamming song for Nyan. But over the months that we played it live at shows, wailing on his custom Strat, he has changed it and made it his own. We recorded an electric rocky version with the band. Then, for this CD, we did a mellower acoustic version. We will release the other as a single or on the next band album.